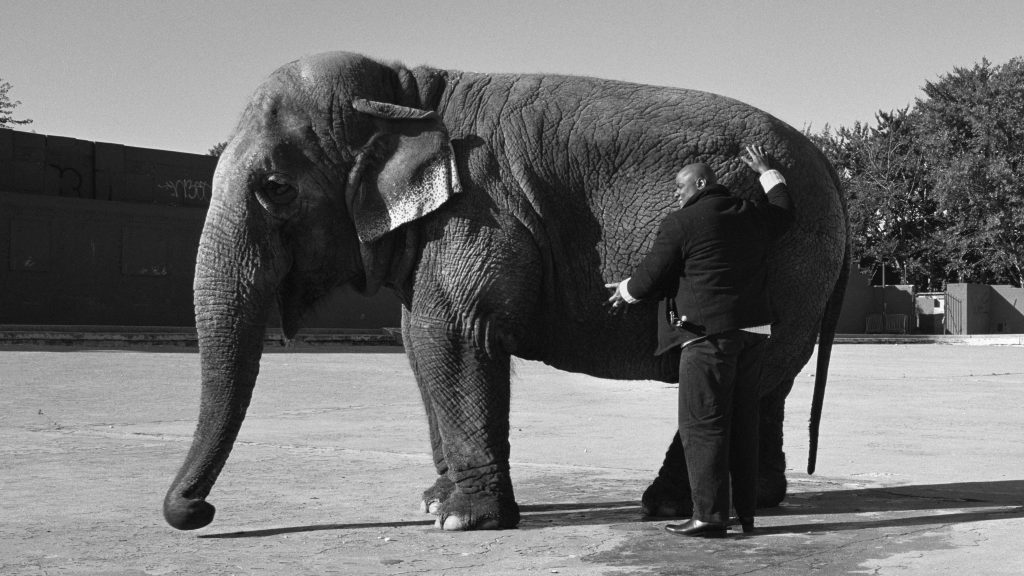 Letter about the blind, for the use of those who see

As a preamble to its group exhibition dedicated to the theme of touch, the Centre photographique Rouen Normandie is offering an exceptional ten-day screening of the film by Venezuelan artist Javier Téllez, Letter on the Blind, for the Use of Those Who See.

Borrowing its title from an essay by Denis Diderot and inspired by the Indian parable of the “Six Blind Men and the Elephant”, the film, shot in a disused swimming pool in Brooklyn, features six blind people and an elephant. They all sit in front of the monumental animal, approaching it one by one and apprehending it by touch. The elephant becomes, in this body-to-body touching, in turn a texture, a smell, a sound. The artist, working between documentary and poetry, frames the action while leaving the field open for other images to unfold, beyond her subtle and silent black and white. And the animal, a monolith in the eyes of those who see, reveals itself under this thick grey leather, fabulously plural and composite.

Javier Téllez, a Venezuelan artist born in 1969, lives in New York. Between fiction and documentary, his work, essentially filmic, probes otherness. Like his film Caligari and the Sleepwalker (2008), made in collaboration with patients from a Berlin psychiatric hospital, he brings into play the subjective character of all representation, overturning, through the force of his poetic approach, the boundaries separating what is commonly accepted as normal and abnormal.

His solo exhibitions include those held at the Museo de Arte Carrillo Gil, Mexico City (2004), the Bronx Museum of the Arts, New York (2005), the Museum of Contemporary Art Cleveland (2011), the Stedelijk Museum voor Actuele Kunst – SMAK, Ghent (2013), the Kunsthaus Zürich (2014) and the Guggenheim Museum Bilbao (2018).

Special screenings from 19 to 30 May 2021, from 2 to 7 pm. Free admission
Prologue to the exhibition À Fleur de monde, about touch,4 June - 26 September 2021
Information: info@centrephotographique.com