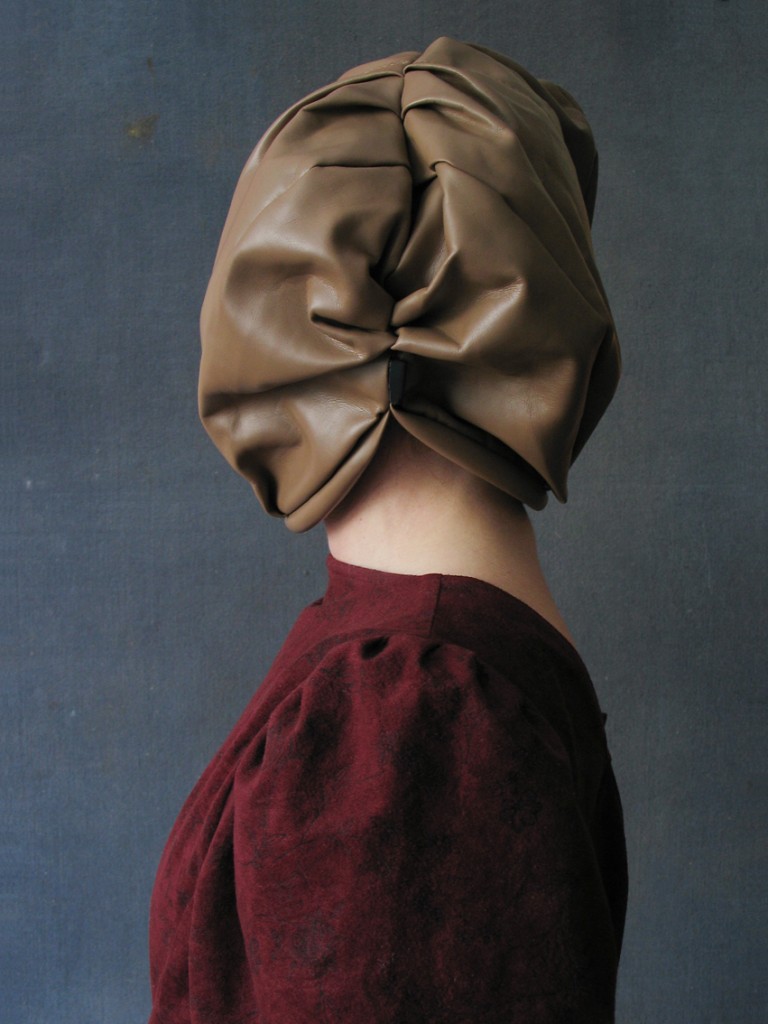 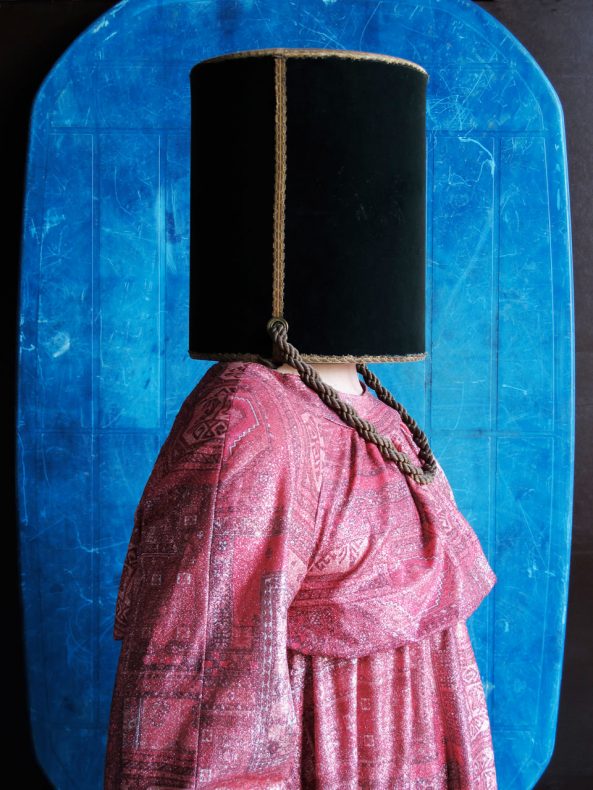 The word “things” passes you by, it means nothing to you: or too many objects that are indifferent to you. If possible, return with a part of your dishabited and grown-up sensibility to one of those things from your childhood with which you had familiar relations. That small forgotten object that was ready to mean everything, playing a thousand roles, being animal and tree, and king and child. This worthless thing prepared your relationship with the world, led you into the event and among men (…) .
Rainer Maria Rilke, “Things”, About the landscape, 1903

The first solo exhibition in France of the German artist Thorsten Brinkmann (1971), Farce Satrape presents some of the illustrious figures of knights, padre, donna and other hybrid creatures imagined by the artist. In this gallery of portraits made within the walls of his studio, the artist stages and embodies fictitious characters with the appearance of high and proud dignitaries. The use of a juxtaposed palette of ochre, emerald green, vermilion and lapis lazuli, the use of fabrics and the haughty bearing of the subject remind us of the Renaissance portraits of kings, queens and princesses. One would almost have the feeling of being stared at, if it weren’t for this single fringed lampshade.

Thorsten Brinkmann’s work is primarily the result of an assiduous collection of lonely, worn-out, dysfunctional objects, set aside by each of us. Letting ourselves be carried along, sometimes happily, sometimes with a soft resistance, by the current of the consumer society in which we are immersed, there are few who turn to these objects incessantly absorbed in the vortex of the obsolete. Thorsten Brinkmann, self-proclaimed «serialsammler» (serial collector), holds them in his nets. There follows a work of assembly, where he lets the objects and their stories come to him with an unfeigned empathy, he sculpts his character, until the moment when, everything having taken place in the decorum of his making, he presses the shutter release from a distance.

Each photograph then bears witness to an encounter, that of a gaze happily and visibly rediscovering the innocence of childhood as exposed by Rilke, and of an informed memory, full of the rich hours of learning of the student of the Hamburg art school that Brinkmann was at the dawn of the 2000s. Underneath its playful exterior, the work is woven with references, more or less direct, to the history of art. From the framing of the profile bust borrowing from the portrait of the Italian nobility of the 15th century to the colors and materials chosen, the artist appeals to our conditioned reflexes. The eye spots here and there the few clues of power crudely left to our distracted attention, and with shiny surfaces and bulging torsos, the memory takes us through some gallery of an eminent museum once visited. And suddenly, the original function of the objects accumulated here resurfaces: behind its noble headdress allure, the smashed wastepaper basket gives us a wry smile, when further on, a royal purple suit reveals the little curls of that ordinary terry bathrobe that you would throw away one day soon.

Thorsten Brinkmann pursues here the disorientation of objects started nearly a hundred years ago by the surrealists and the «total revolution of the object» advocated by André Breton. Displacing the object from its context, to reveal its poetics. Unavoidable figure as regards detour, Marcel Duchamp also haunts the theater of the German artist. There is the same practice of disguising the object, of course, which allows the circumstances of its appreciation to be shifted, and then there is the disguise of oneself, a parallel made explicit by Brinkmann himself posing as Rose la Nuit, in a tribute – with less solemnity – to Rrose Sélavy, a female character embodied by Duchamp and photographed by Man Ray in 1921.

The use of his own person could also place Brinkmann in the lineage of 1970s performers acting in their studio. However, unlike his predecessors, the artist always covers his face and puts himself in the viewfinder to better disappear behind his fictitious identities. Thorsten Brinkmann counters all attempts to put his work in a box with a spear of junk. The studio, always lined with set elements, does not expose itself like a sacred perimeter containing some creative secrets. And the body, deprived of its faculty of glance, engrossed in these accumulations of incongruous clothes, as choséifié, is at home the place of no revealed intimacy. A kind of equivalence between the spirit and its products, between the body and the things, in a pataphysical illogic is then drawn. To escape from the normative form, from the determinism is also manifested in Brinkmann, as in the father of the ‘Pataphysics, the writer Alfred Jarry, by a pronounced taste for the mechanics of the words, the bypass of their sense and the deviation of their sonorities. A look at the titles of the works: polyglot puns, homophony and homonymy are going well, recalling there besides Jarry, a certain Selavy.
To the portraits are joined more recently some assemblies, heterogeneous montages of mismatched objects. Some prolong the environment of the portrait, others are presented like still lifes brought back to life. The term «assemblages» used by the artist to designate these works evokes Dada, the substratum of all the avant-gardes of the beginning of the twentieth century, and more particularly the artist Kurt Schwitters and his Merz, that is to say the principle of a work elaborated by means of taking fragments and associating and expanding them beyond the frame.

With humor, and a touch of irreverent fantasy, Thorsten Brinkmann and his acolytes Donna di Smoothly, Jorn van Lanzebleu and others interpret the relationship of modern man to the object and its consumption and replay again and again in front of the mirror of the camera the acts of a theater of the absurd that suits our time well. Because finally, what is more necessarily vital than the henaristic pleasure of playing and laughing at the world as well as at oneself? What more salutary gymnastics than to thumb one’s nose at «the pontificating pedantry ready to settle down in a satisfied deduction» [1]?

Let’s borrow the motto of an eminent member of the College of ‘Pataphysics promoted to the rank of Satrape, Boris Vian, to quote Thorsten Brinkmann: «I like to think about things I think others will not think about».

Friday, October 12, from 6 pm
in the presence of Thorsten Brinkmann

Saturday, October 20, 5 pm
Fictions and duplications, by Sophie Delpeux, art historian
in the context of Raout #2, event of the Rrouen network

Thursday, November 15, 10:30 am
Objects of use and image environments, by Anne Lefebvre, philosopher
in the context of Écoute l’artiste, auditorium of the Musée des Beaux-Arts, Rouen