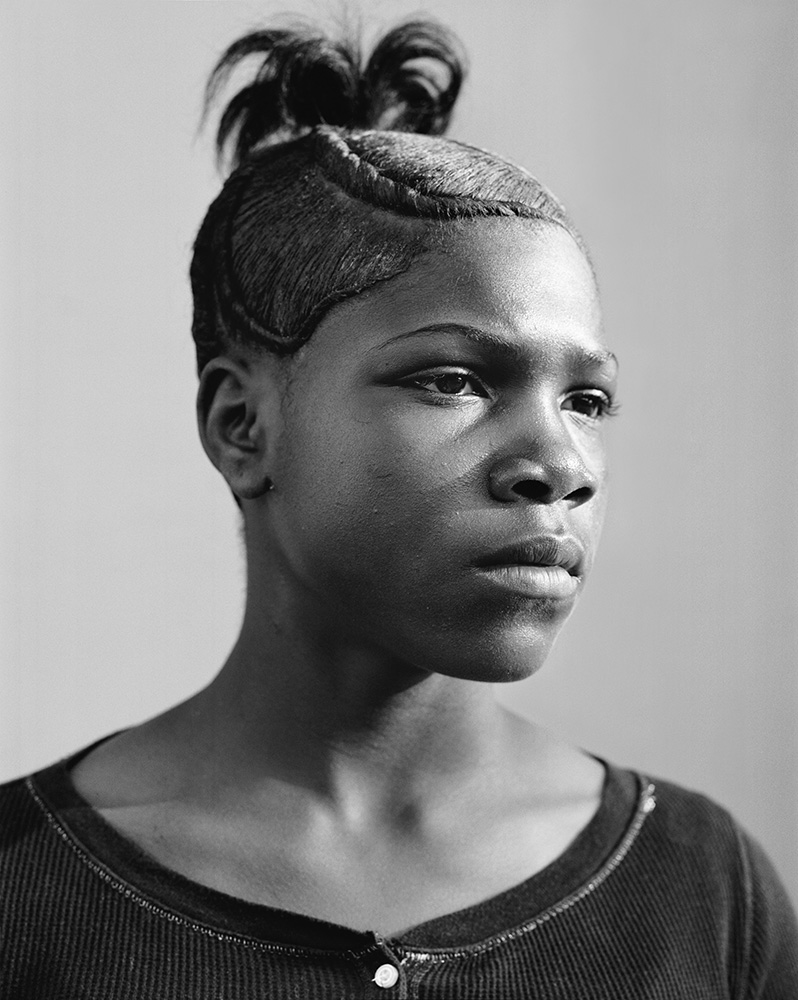 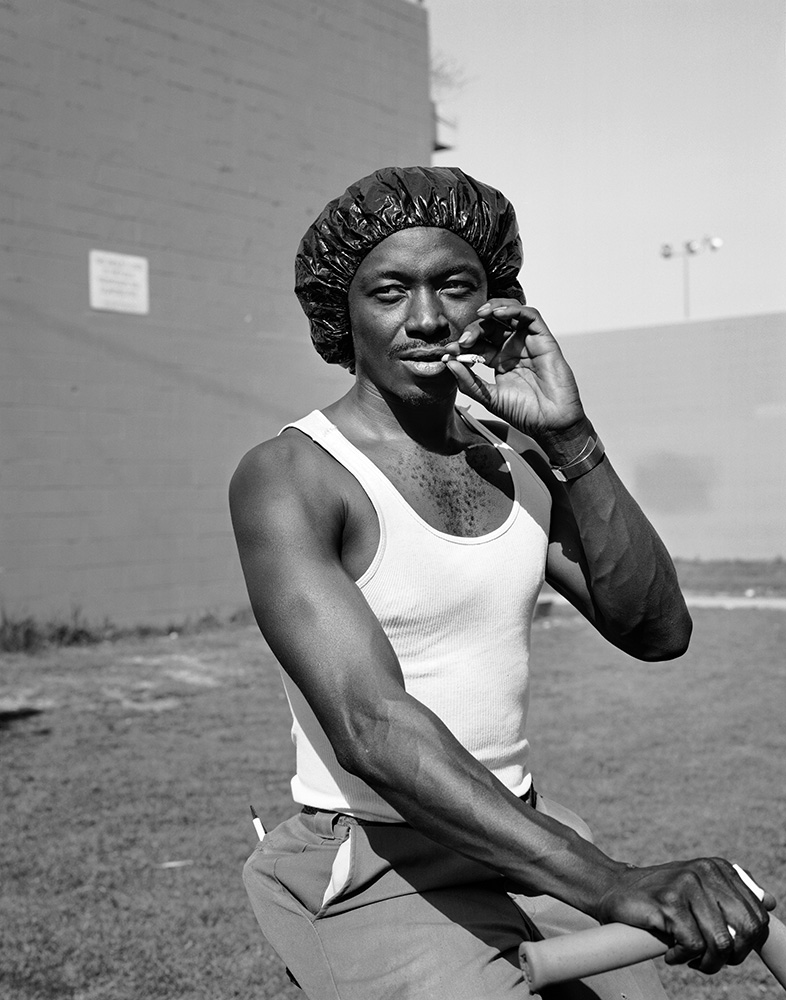 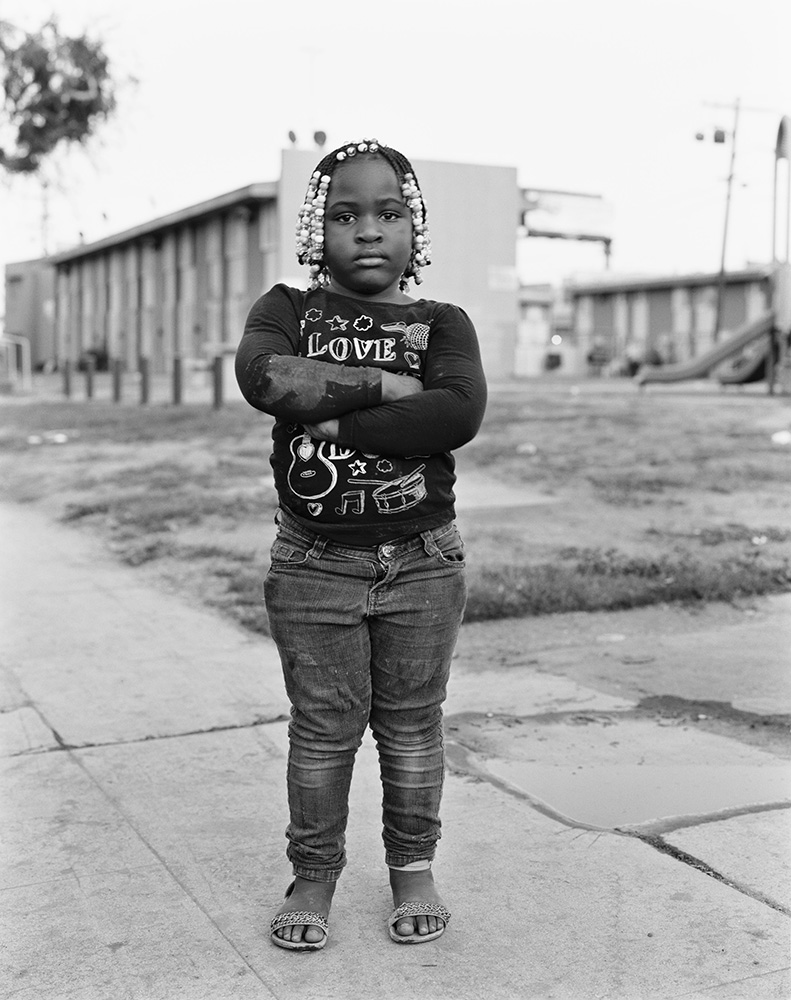 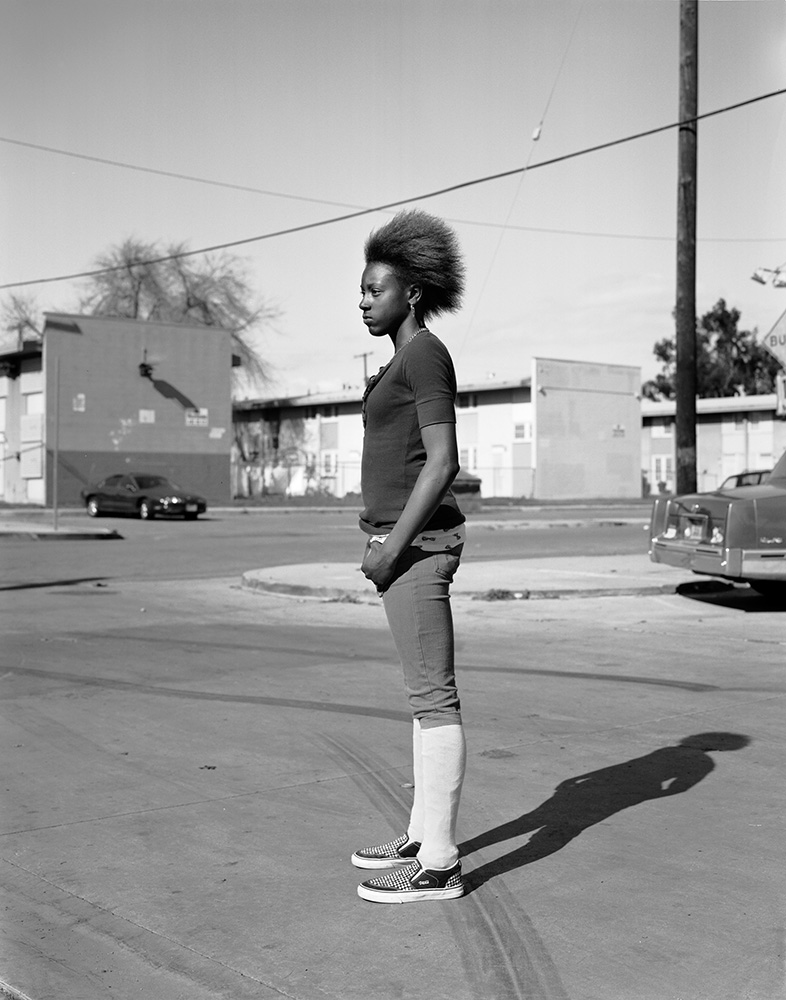 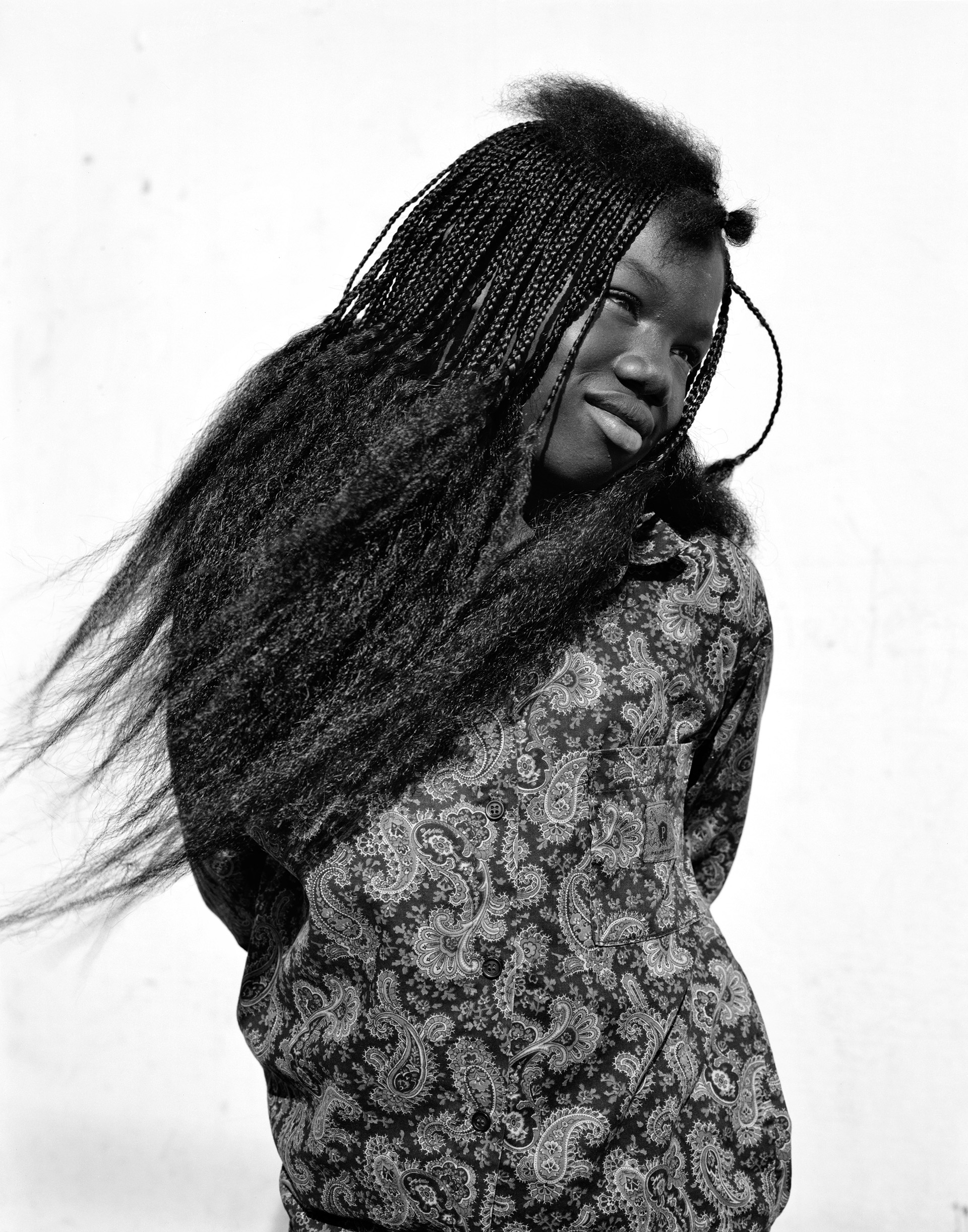 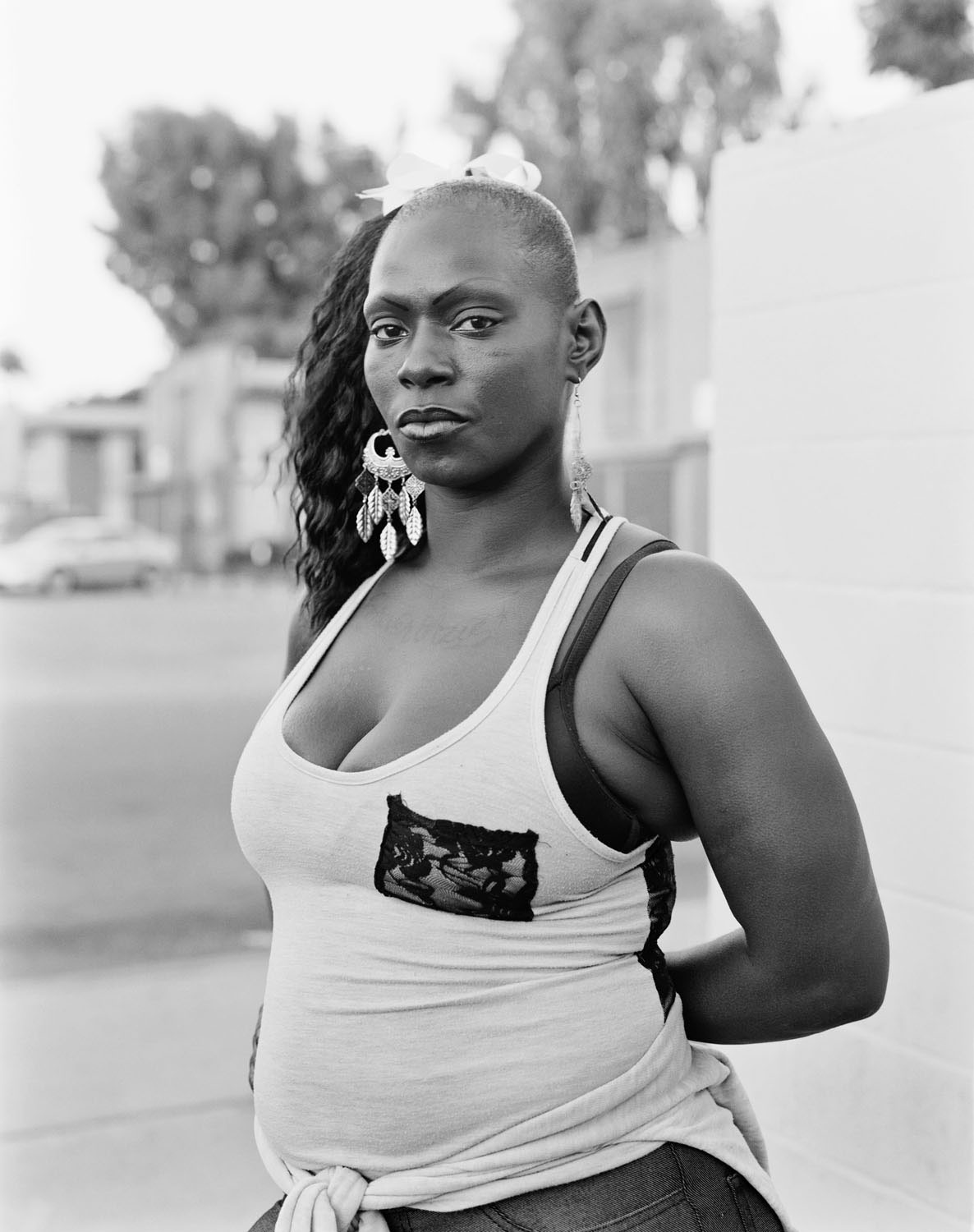 Are you FBI? This was the first question, thrown on a note of defiance, mixed with apprehension and weariness, that Dana Lixenberg, pacing the aisles of Imperial Courts, had to answer. So, FBI agent? One could believe there in the interrogation of a spirit intoxicated by the television series if one were not in the United States, in Los Angeles, and more precisely in the district of Watts. In the land of cowboys and Indians, there are places, including Watts, where this scenario, as stale as it is tragic, is still played out daily, in which the roles of good guy and bad guy are invariably handed down from generation to generation, without redistribution. In fact, following this well-tried logic of subjugation, what could a young white woman want in this forgotten, feared black neighborhood, if not to right wrongs?

In 1992, photographer Dana Lixenberg (1964, Netherlands) was sent by a Dutch weekly to South Central Los Angeles. She went to report on the state of this area, which had been severely affected by the riots following the acquittal of the police officers involved in the beating of an African-American cab driver named Rodney King. The video footage of his attack had already gone viral, and the verdict had inflamed neighborhoods in some of the nation’s largest cities, stirring up a long history of racial injustice. When Dana Lixenberg arrived in Los Angeles, she walked through streets that looked like battlefields. She observes, meets the inhabitants, listens, and discovers a reality that is much more bitter, complex and nuanced than the approximate and partisan media translation that is made of it. To the haste and the noise, she wants to respond with time and silence and decides to return, outside the framework of a commission. March 1993, this time equipped with a large format camera and black and white film shots, Dana Lixenberg takes daily photographs. Polaroids and negatives accumulate; here is the first stone of her Imperial Courts project-monument, the most extensive one undertaken by the photographer to date.

Built in 1944, Imperial Courts is a subdivision of parallelepipeds interspersed with alleys loosely punctuated by sparse trees and squares of screened lawns. The cramped quarters are home to a community of predominantly African-American residents, who have migrated from the southern states. Unemployment and crime are at record levels. Abandoned, stigmatized, ghettoized, struggling with social determinisms that seem impossible to overcome, these residents receive Dana Lixenberg with distrust. Collaborate, open your door, and then what? “What’s in it for us?” they ask her pragmatically, and logically disillusioned. Aided by Tony Bogard, leader of the PJ Watts Crips gang in Imperial Courts and unofficial godfather of the neighborhood, Dana Lixenberg penetrates step by step, portrait by portrait, the territory of Imperial Courts. Taking care to share the results of the previous day’s shootings, distributing Polaroids to her subjects, she was able to remove any remaining resistance and gain the community’s trust.

Now introduced, she returned to Imperial Courts for an exhibition in Los Angeles in 1999. Several years passed, during which she maintained contact with the families without photographing them. As time went on, the community became increasingly attached to her 1993 portraits. She then decided to return with her camera and stayed there many times between 2008 and 2015. Each of her trips, she explains, is preceded by the same excitement at the idea of reuniting with the families and environment of Imperial Courts, a feeling immediately seconded by an apprehension of what she will, or will not, find. Dana Lixenberg makes no show of the gang rivalry and the daily violence that ensues: the tragedies that punctuate the lives of these families are whispered in discreet, chilling little crosses under their portraits.

During these twenty-two years, she has photographed both men and women, as well as their young children, who have become parents in their turn. Over the course of the photographs, filiations are reconstituted. The action of time on these beings is summarized in a concise photographic language, entirely centered on faces and gestures; a language that the photographer has never ceased to chisel, visit after visit. Contrary to the caricatured image that sticks to the skin of the inhabitants of Imperial Courts, Dana Lixenberg, all sophistication and subtlety and equipped with her camera, her tripod and the ceremonial that accompanies them, chooses a black and white as rigorous as it is sumptuous. Behind the black veil of her camera, Dana Lixenberg scrutinizes a world that is not accustomed to such benevolent attention and manages to bring out a valiant humanity despite adversity, made of crossed glances and delicate gestures, far from the noisy imagery in which the media and popular culture encapsulate them.

To devote time to them, to look at them, to listen to them, to come back and give them something beautiful that speaks of them, no one has ever done that. Dana Lixenberg’s Imperial Courts, dressed in black and silver and with a poignant eloquence, exposes and, in its own way, repairs this wrong.

The Photographic Center presents the first French exhibition of Imperial Courts, a project for which Dana Lixenberg was awarded the prestigious Deutsche Börse Prize in 2017.
The photographer has recently exhibited at Huis Marseille (Amsterdam), The Photographers’ Gallery (London) and the Aperture Foundation (New York). A book of the same name was published by Roma in 2015.

Friday, October 13, starting at 6pm
Followed by a reception/meeting proposed by the Société des Amis du Centre photographique. In partnership with the Rose des Vents, on reservation.in presence of Dana Lixenberg

Saturday, October 14: VISIT with Dana Lixenberg, 5pm
LECTURE West Coast : L’autre rap, by Thomas Blondeau, Les Inrockuptibles, with the complicity of Bachir, at 6pm
Sunday, October 15 at 10am and 2pm: Portrait workshop, Les Hauts de Rouen, with Olivia Gay
*as part of Raout, an event of the RRouen network

Wednesdays, November 15 and December 6, at 2 pm

Saturdays, December 9 and January 6, at 5 pm