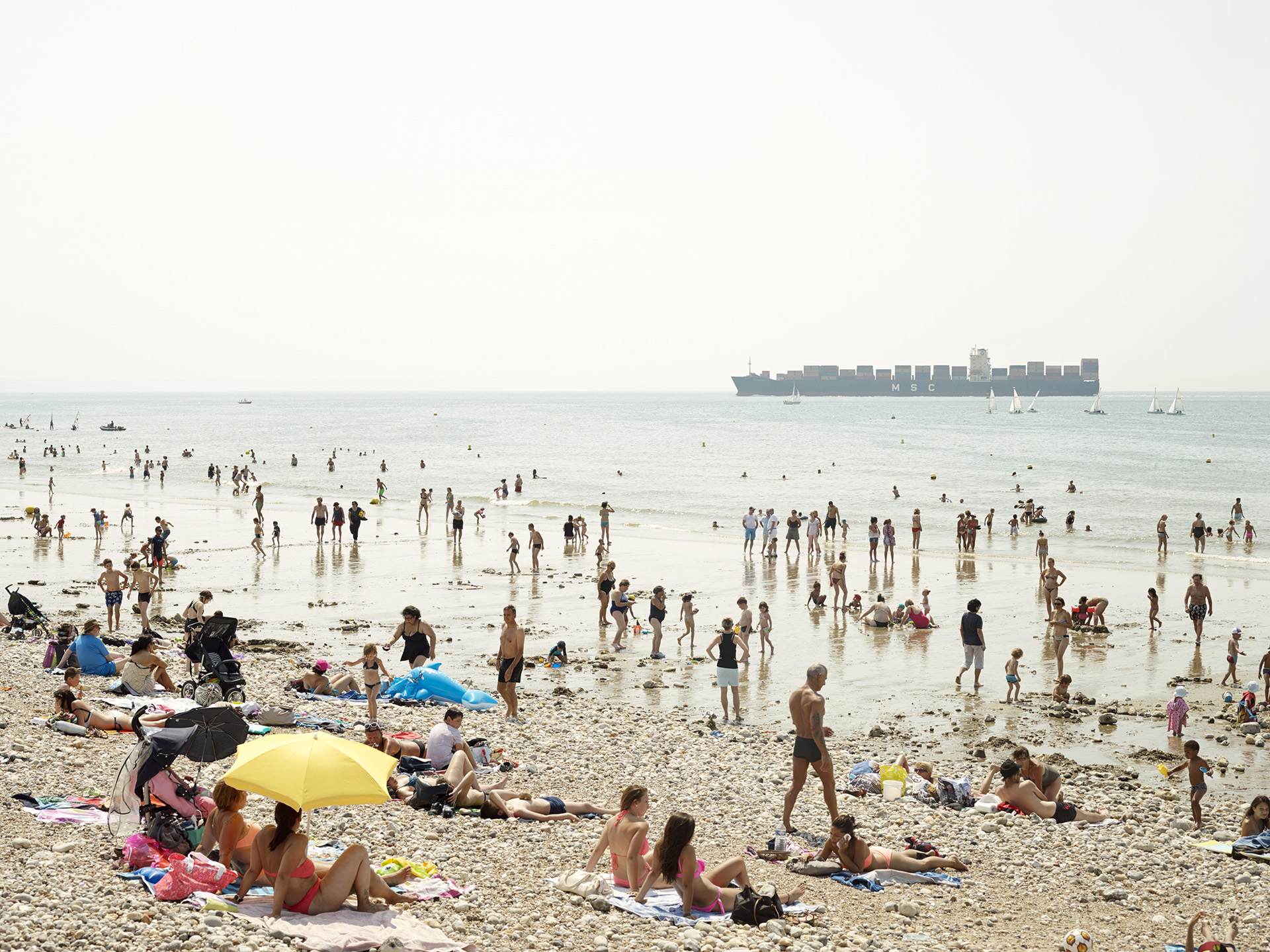 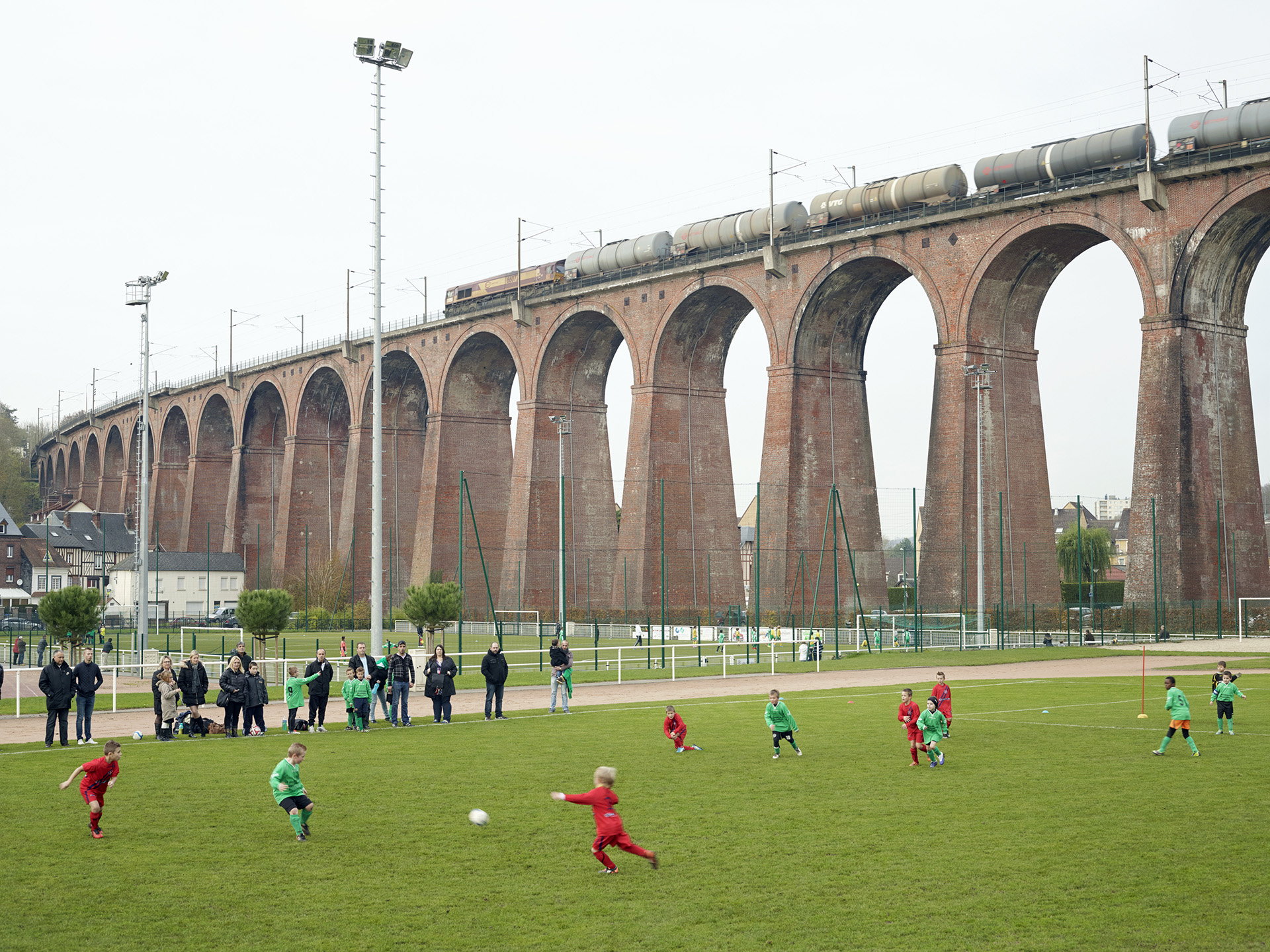 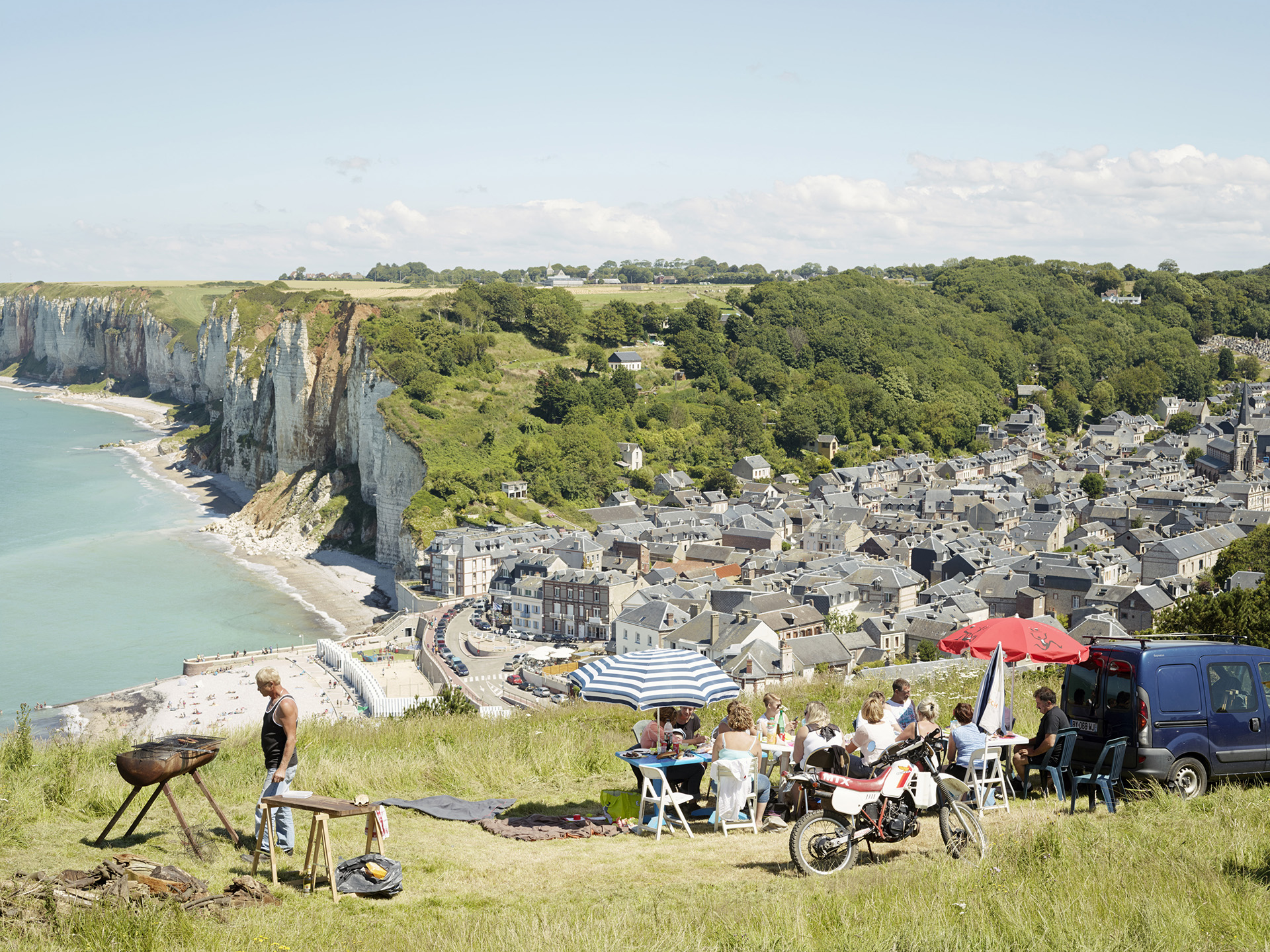 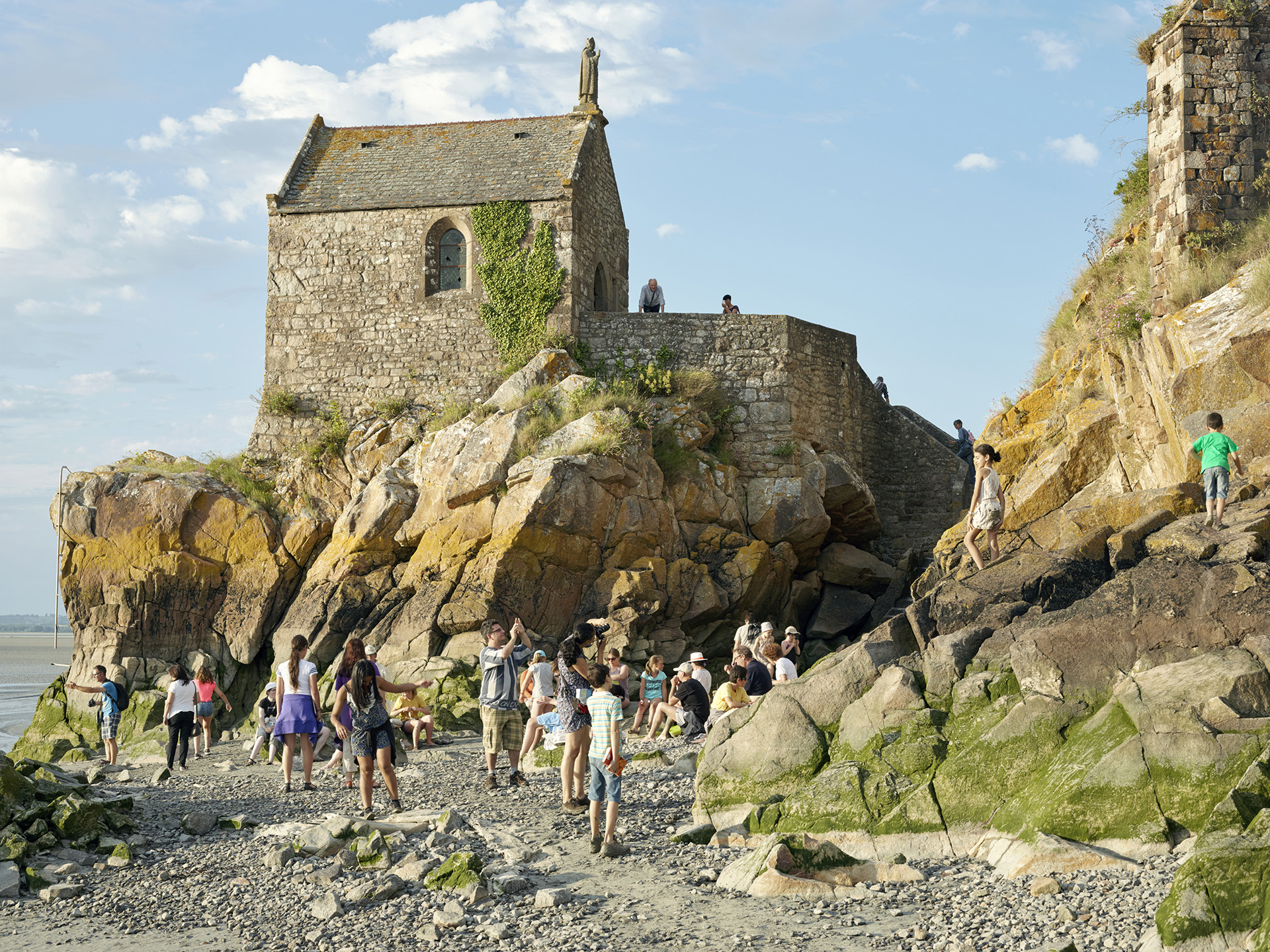 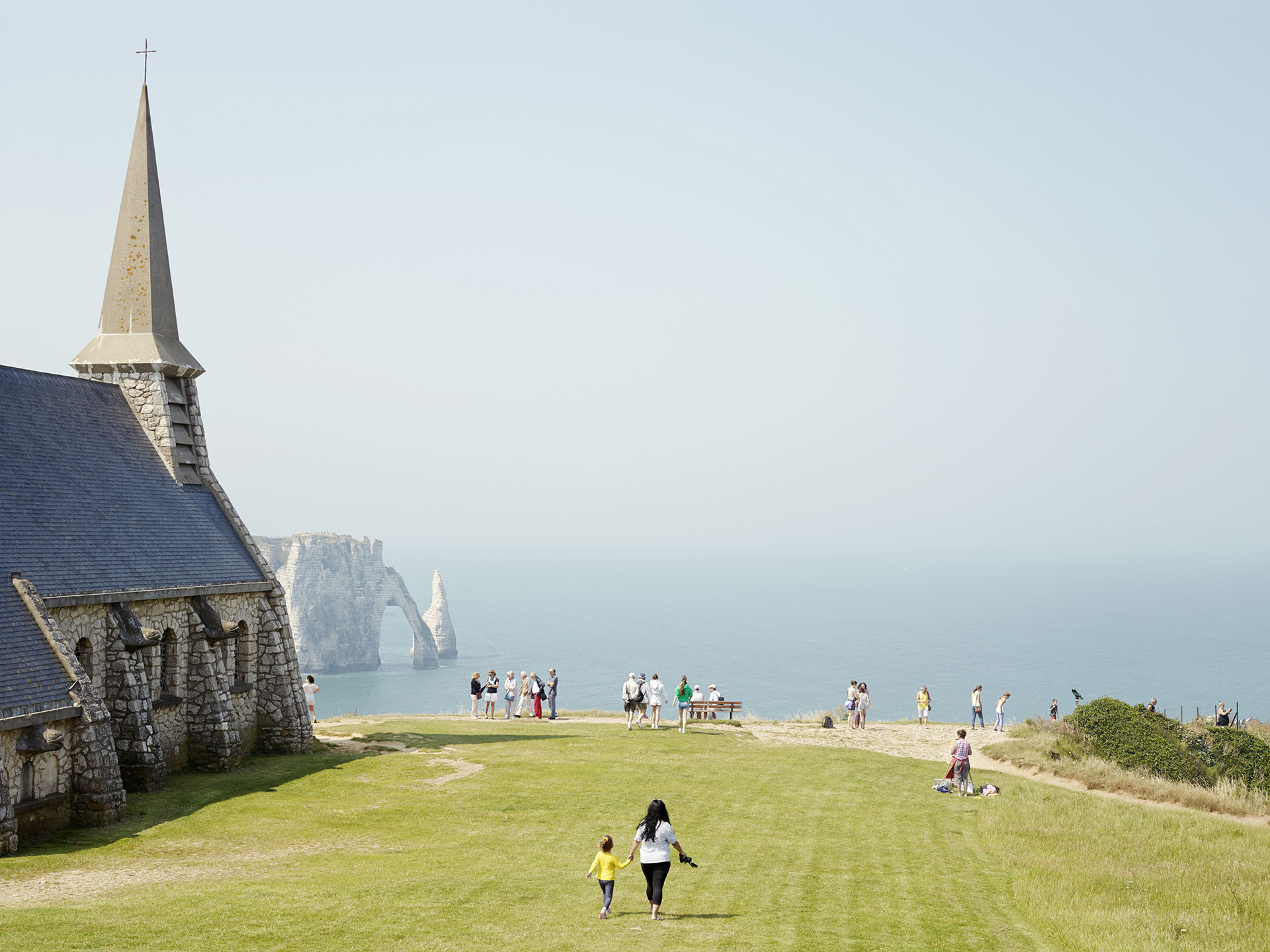 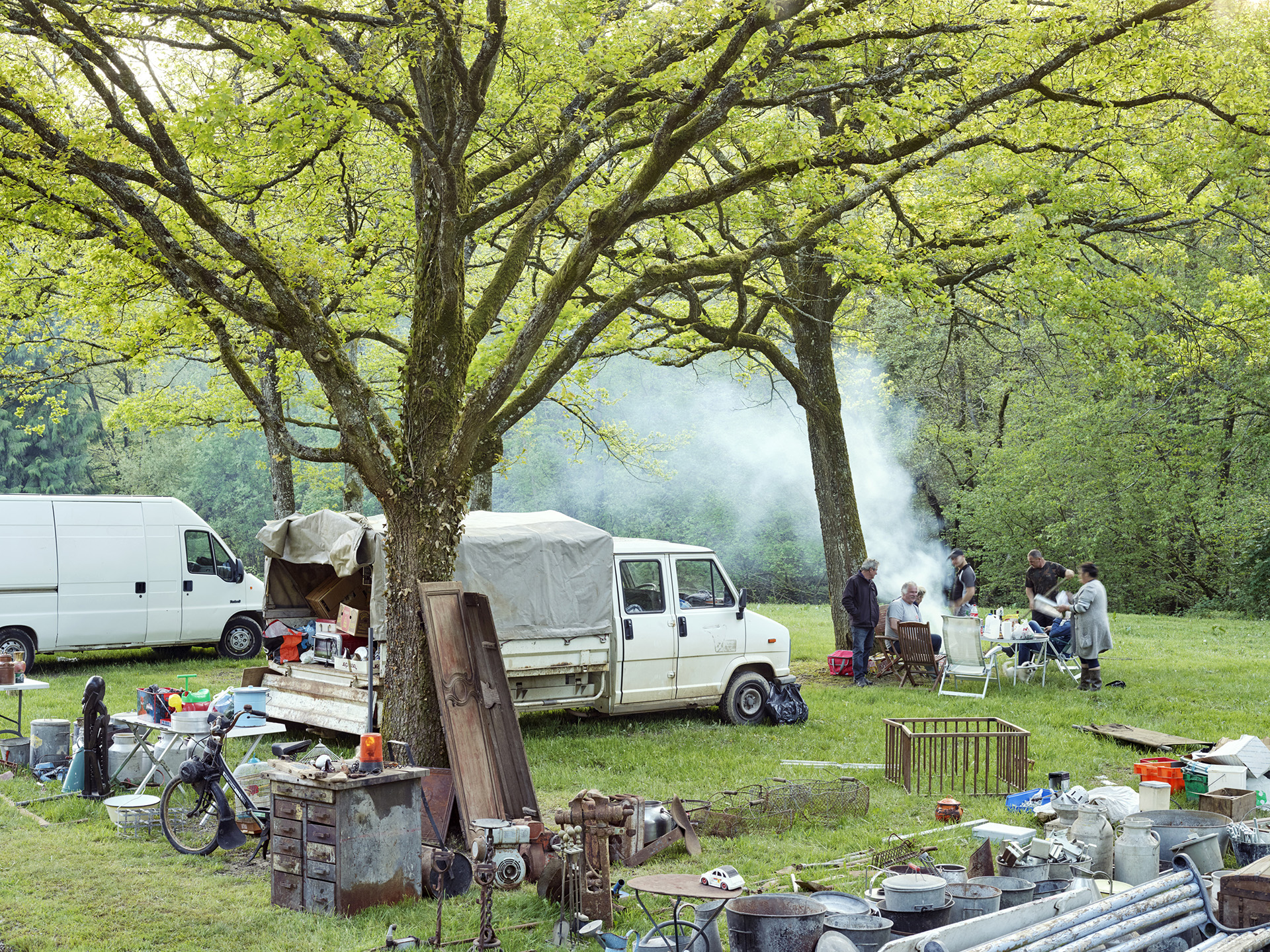 “You have roughly 400,000 hours left to live”: it was under this catchy title that the newspaper Libération published an interview with Jean Viard in 2012. The sociologist, who has devoted his career to the study of mobility and “social time,” develops his thesis there, all in figures. The average life span, he explains, is now 700,000 hours, compared to 500,000 in 1900. We sleep 200,000 hours, and the legal working time has increased to 67,000 hours. After deducting sleep and work, there would be 400,000 hours left for “learning, loving, activism and dying”. This “vacant” time is exercised at home, in the place of private sociability that is the house and its possible garden, and in the open air, in contact with the other – the other environment and the other human being that one will meet on the way. It is as much this world of free time spent in the open air, as the territory of our region Normandy that Simon Roberts has come to explore.

Here is Normandy, and its days of celebration and entertainment, as seen by an Englishman. Our neighbor across the Channel, the photographer Simon Roberts is a young figure of English photography. Born in 1974, he is part of this typically British photographic tradition, focusing on the portrait of what links territories and people. At the end of the 2000s, he produced a body of images that has become a milestone: collected in a book entitled We English, they tell the story of the English landscape, inhabited and surveyed, a lived space, the seat of daily life, celebrations, even
rituals. In line with the commissions the Photographic Center has received in recent years, dedicated to the landscapes of the cliffs, the Seine Valley and reconstructed cities, the Center asked Simon Roberts to look at the territory of the greater Normandy region. The residency led by the English photographer is an opportunity to reveal this time a territory perceived as a vast human landscape.

“Beware, oh traveler, the road also walks” wrote Rainer Maria Rilke. Far from being a fixed reality, the landscape is an experience and a relationship, a common ground between the environment and the one who invests it with his steps and his emotions. He and we (collectively and individually), elaborate together a weft mixing the real and the symbolic, the natural and the cultural, the objective and the subjective. For two years, the photographer has recorded local festivals, parades, commemorations and entertainment activities. When everything is movement, flux, mobility, he stops. Camped on the roof of his van, or perched at the top of a ladder, he captures the encounter between an environment and its occupants for a day. Between these two protagonists, the tone is often familiar, as in this shot where a group of friends take this corner of the Yport cliff for their garden, taking out the barbecue. Emotional” landscapes, shared places in short.

Thus perched, Simon Roberts’ lens takes in a wide view. The resulting distancing from the subject and the individuals simultaneously distances the photograph from the anecdotal and the instantaneous to confer on these scenes, sometimes as trivial as a swim in the sea or a bike ride, the majesty of a pictorial representation. In the space of these large canvases, Simon Roberts paints a generous, benevolent and curious portrait of Normandy and those who cross it. Exploring the seaside, the rural villages, the sports sites, his pictures reveal a joyful and unsuspected diversity of uses and ways of “living” these landscapes.

with the Rn’Bi library network
Wednesday, July 5, 19 and August 2, 2pm

Photographic Center
+ Museum of Fine Arts at 11am, Brunch,

of photographic practice at 3:30 pm