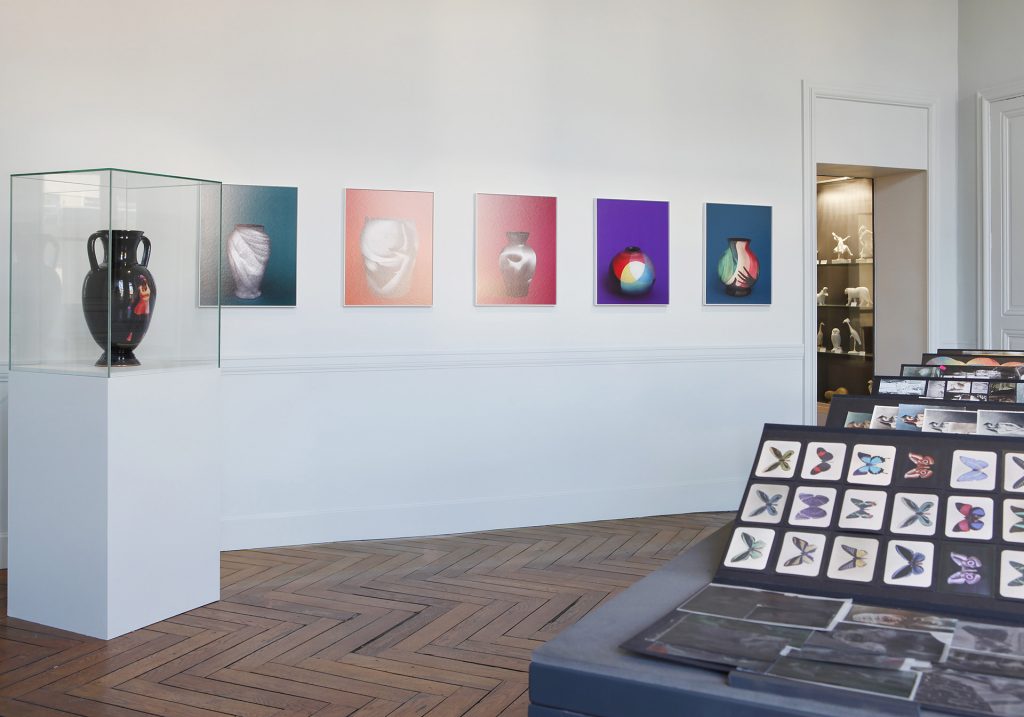 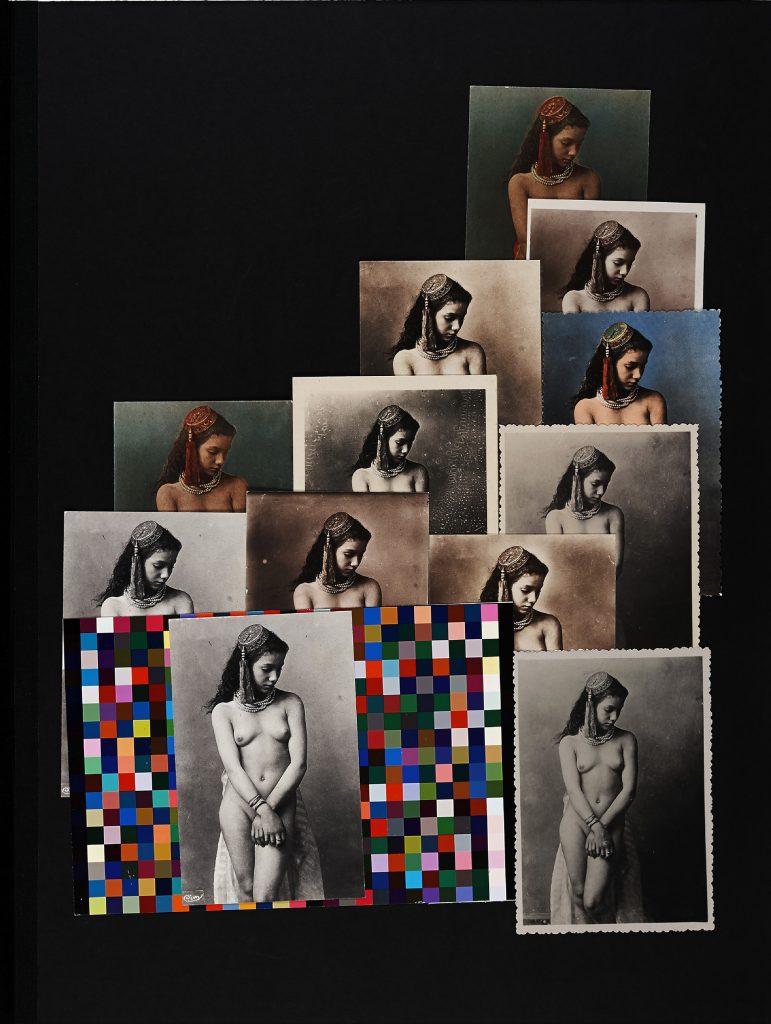 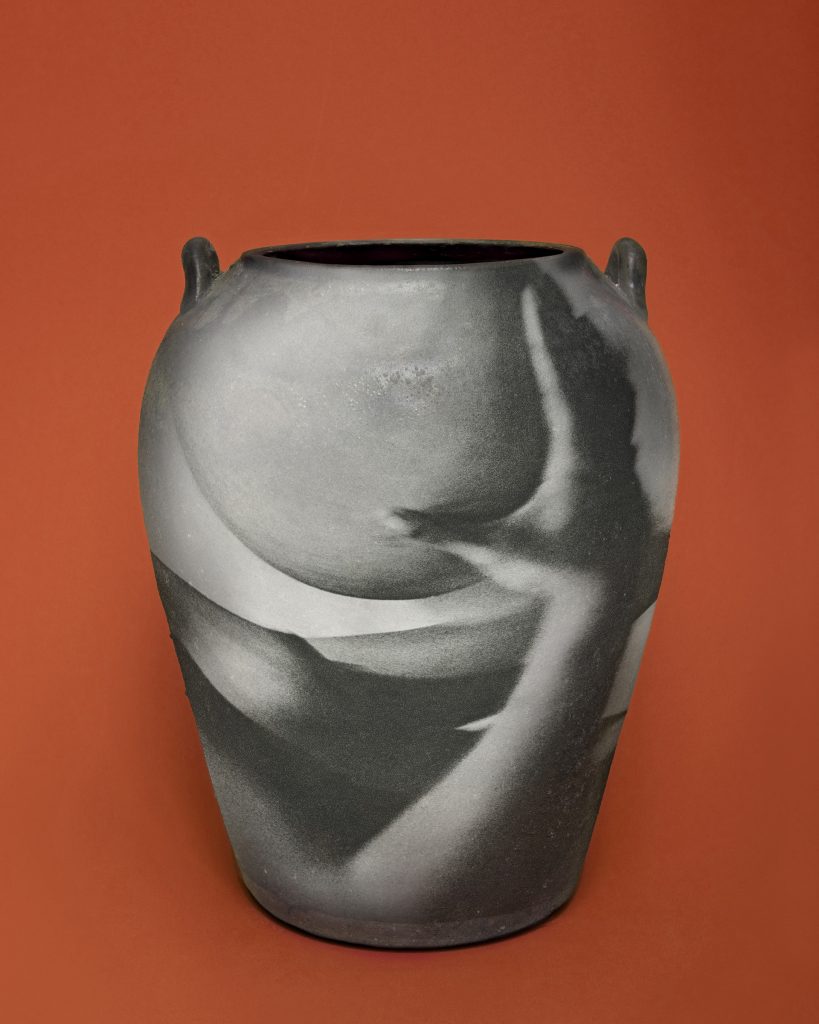 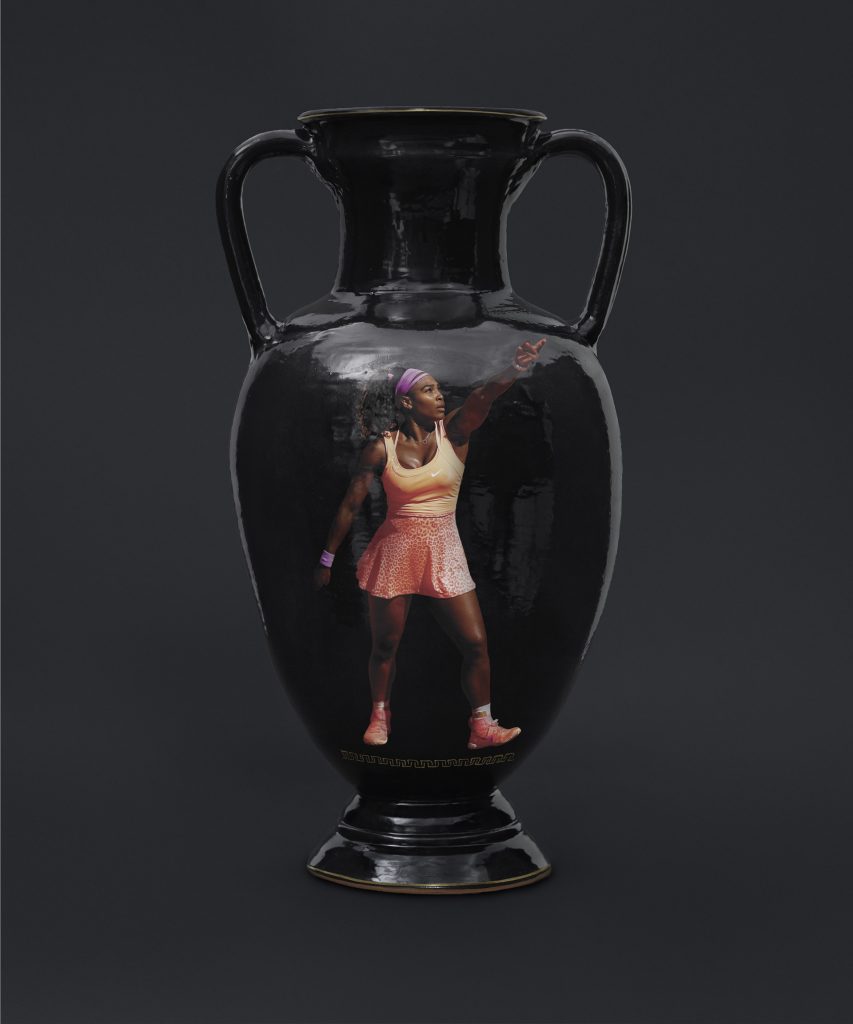 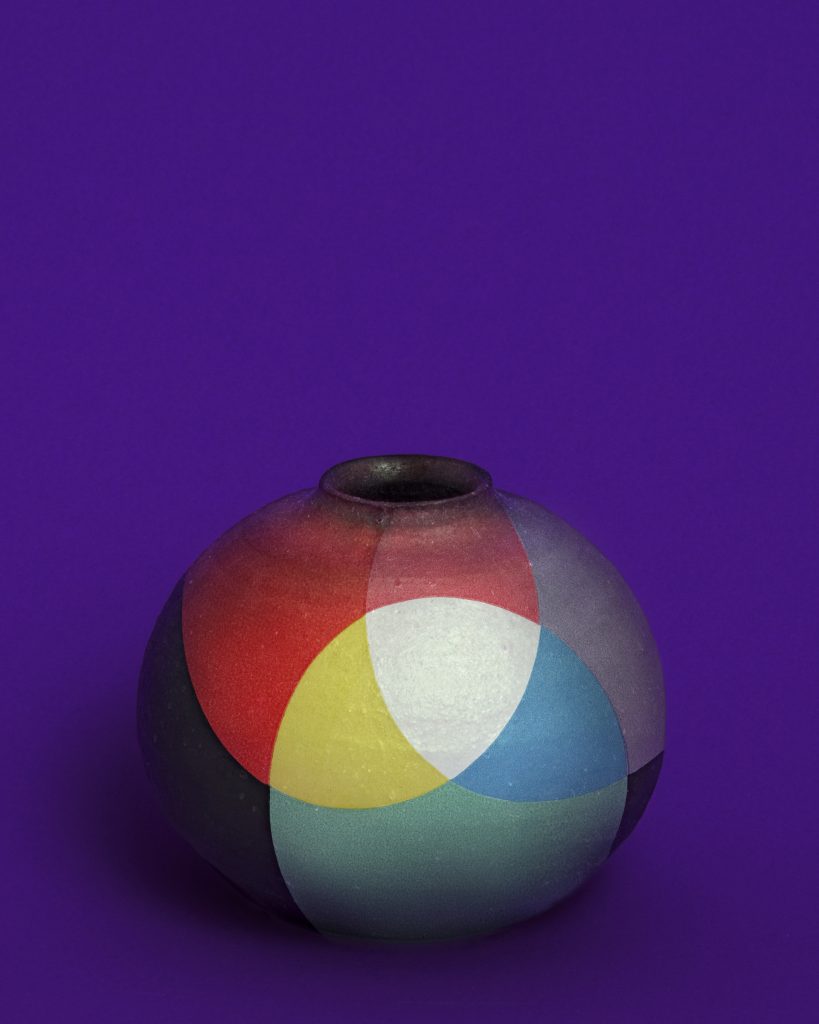 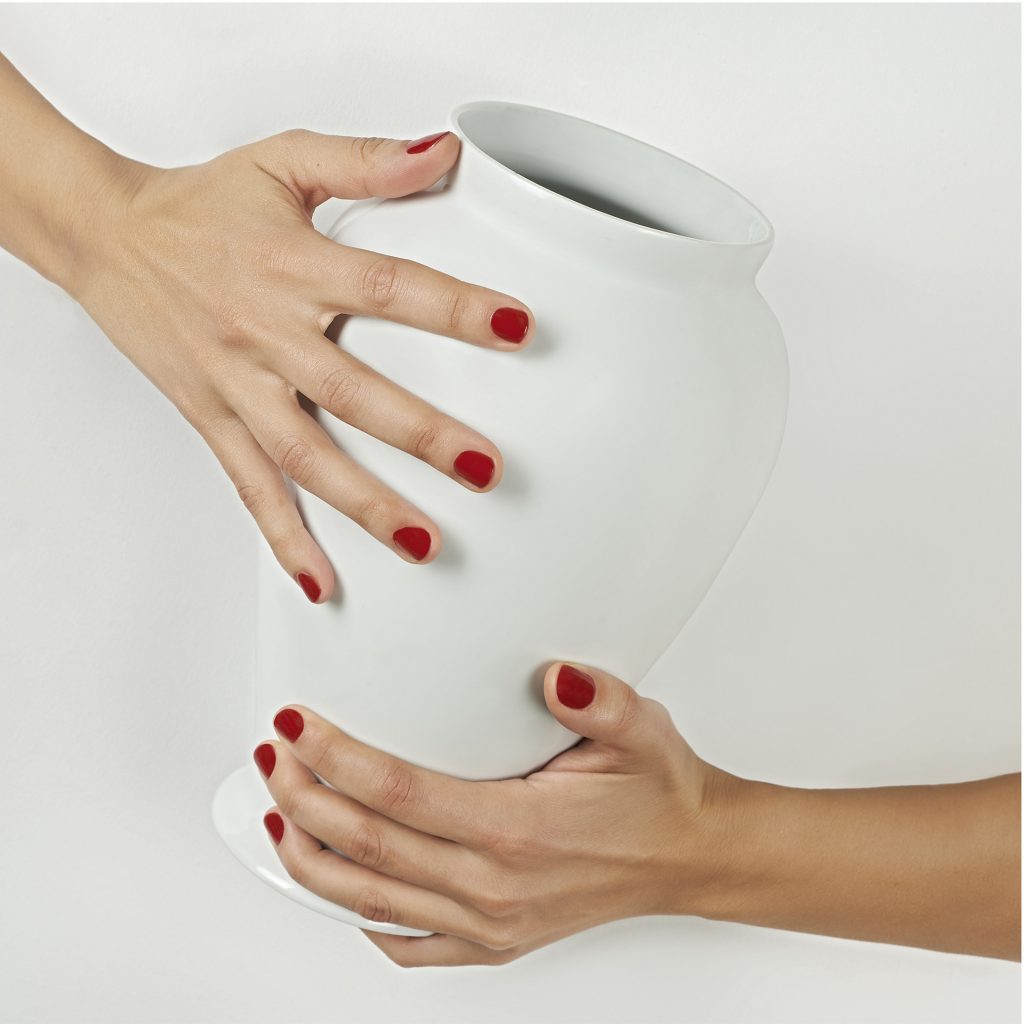 It is the hidden aspects of media that should be taught: their invisibility gives them an irresistible power. We need to understand the form, and the nature of those forms.
Marshall McLuhan, 1977

Nicephora is a noisy work, an echo chamber where we perceive the steps and words of female presences that whisper to us their refusal to let themselves be enclosed in their image. Beyond the archetype – woman-sexual object, strong woman, romantic woman – they still tell us, they existed, similar and different, rich, complex, alive. Listen to the images reproduced, you will hear an American tennis player, an ancient Greek heroine, an anonymous young Berber woman, a TV presenter conversing. Between them, a male presence circulates, that of Nicéphore Niépce, inventor of photography. In an attempt to contain them all, the motif of the amphora returns, in image and in volume, linking Antiquity to our time. The amphora and its curves, container as well as screen, symbol of femininity and vehicle of narration: the amphora therefore to tell the story of woman through the history of its representations. The one who brings them together here in this dizzying conversation is Alinka Echeverría, an Anglo-Mexican artist born in 1981, laureate of the BMW Residency at the Nicéphore Niépce Museum in Chalon-sur-Saône, a residency of which this work is the fruit, or rather the rhizome, so many are its ramifications and its persistent vivacity, only asking to develop further.

The context of realization is essential here. The artist takes the museum that welcomes her for the creative residency as the anchor point of her thought and its illustrious figure, Niépce, born Joseph and who renamed himself Nicephore, the Greek name for “the one who carries the victory”. The name also refers to an African butterfly, like those Alinka collected as a child. Photography – antiquity – collection, and between the three, Alinka Echeverría, a woman explorer who went to collect specimens. The artist does not flit from one idea or source to another. She collects and accumulates heterogeneous materials, letting their history, their context decant. From the butterflies pinned and arranged in a box from her childhood to these Berber women “laid down” on the paper of Combier postcards at the beginning of the 20th century and found in the collections of the Nicéphore Niépce museum, a first echo is formed in the rhizomatic spirit of Alinka Echeverría. That of a beauty subjected to the dull violence of its capture, of the fascination for the idea of exoticism, of the desire to categorize, to possess, that the image and the photography would come to fill. In Nicephora, the artist brings together photography – a contemporary vehicle for images – and ceramics.

Returning to the sources of the photographic medium, she examines the different media that have marked its history over the 200 years since its invention by Niépce: heliography, glass plate, phototype, heliogravure, solarization, photochromy, offset, anaglyph, televisual image, up to serigraphy on enamelled terracotta. In order to realize this morphing between the ancient form and the contemporary form, the artist extracts several pieces of the museum collection that she digitally places on vases, previously photographed on a colored background.

Around these framed photographic prints, Alinka Echeverría reveals the threads of her thought: a book assembled in leporello (accordion) runs on a table, leaving her inspiration and visual notes boards to expose their inevitably subjective and fragmentary character. Added to this are boxes assembled in mosaic and arranged on the wall: a scenographic construction that echoes the media construction of Serena Williams’ character. Finally, the centerpiece of the exhibition, in which she is enthroned on this amphora bearing victory, a Serena Williams silk-screened, at the dawn of another of her exploits: “an amphora for Nicephorus”, an impossible piece because it does not follow any of the marked paths, at the crossroads of the ancient and contemporary worlds, exactly as Alinka Echeverría had printed it in her mind