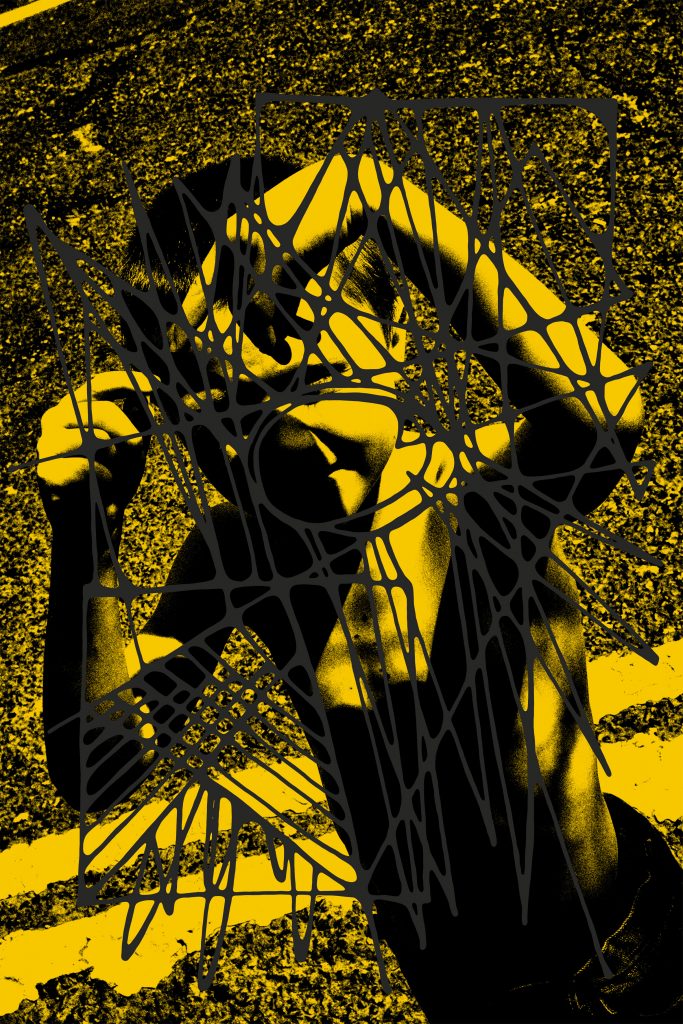 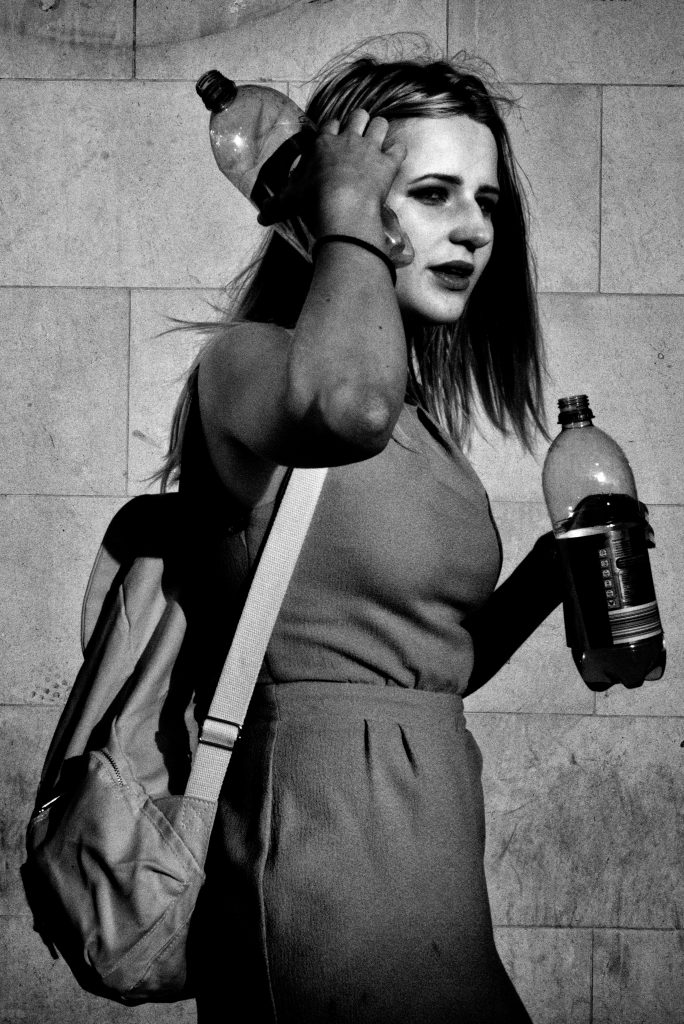 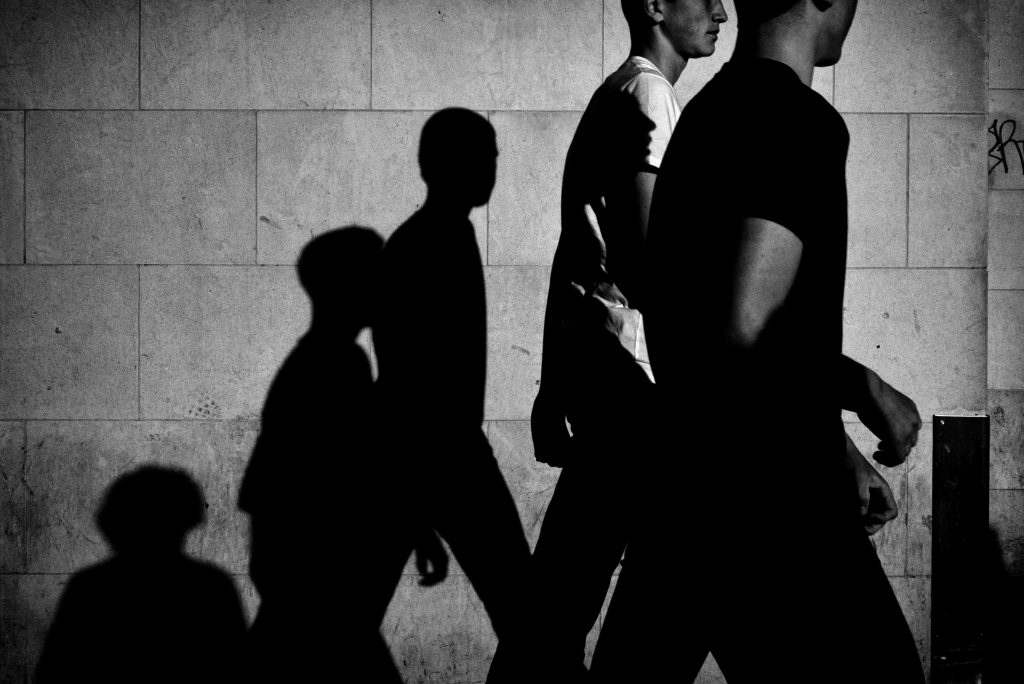 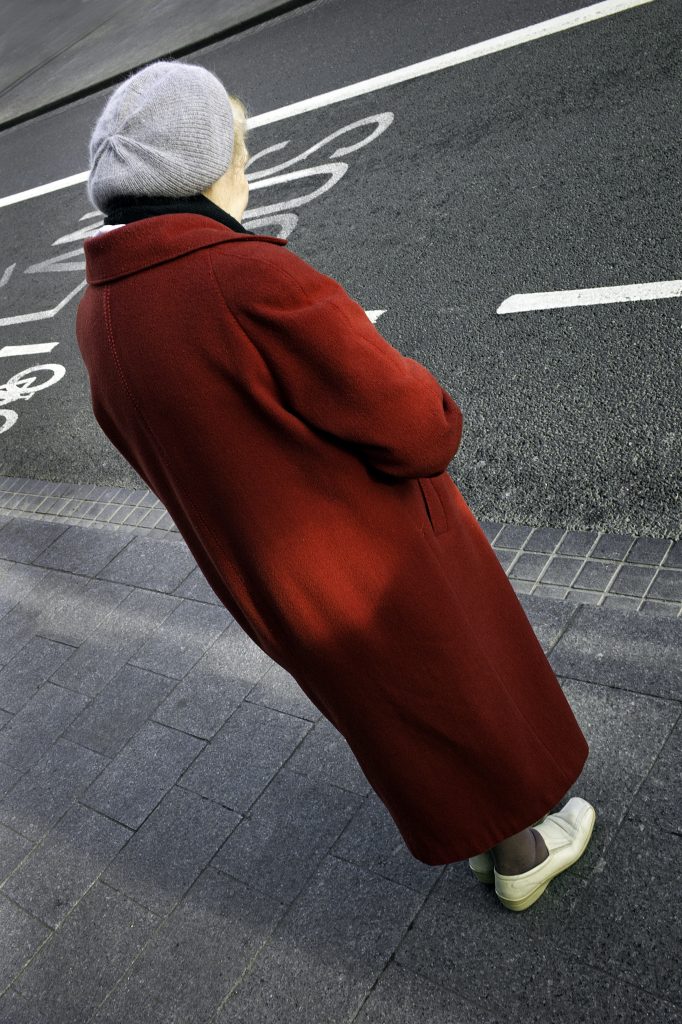 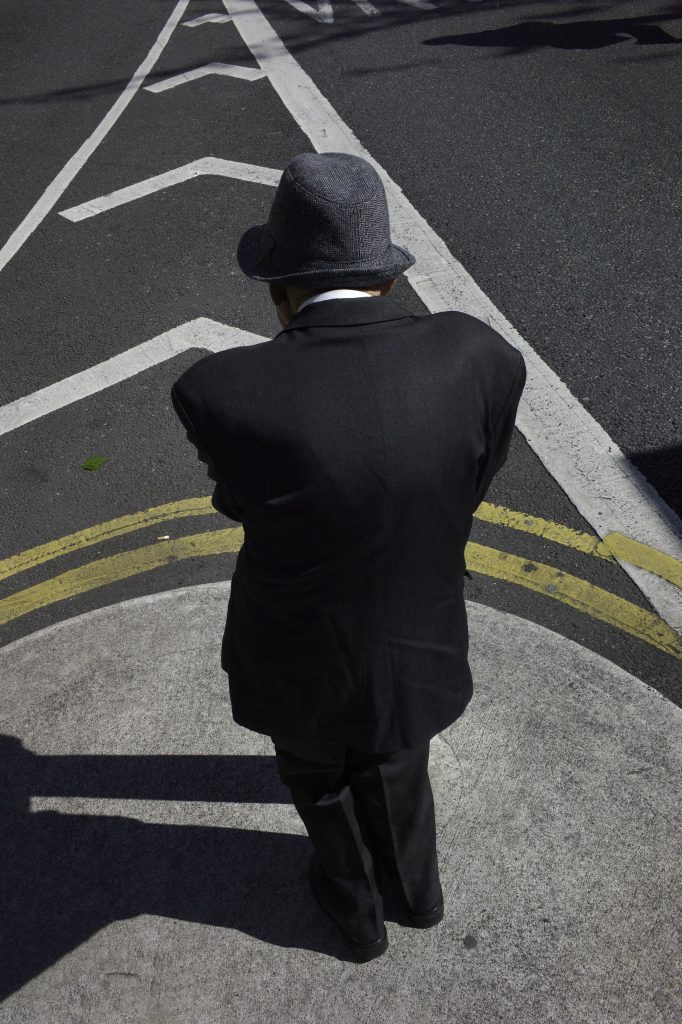 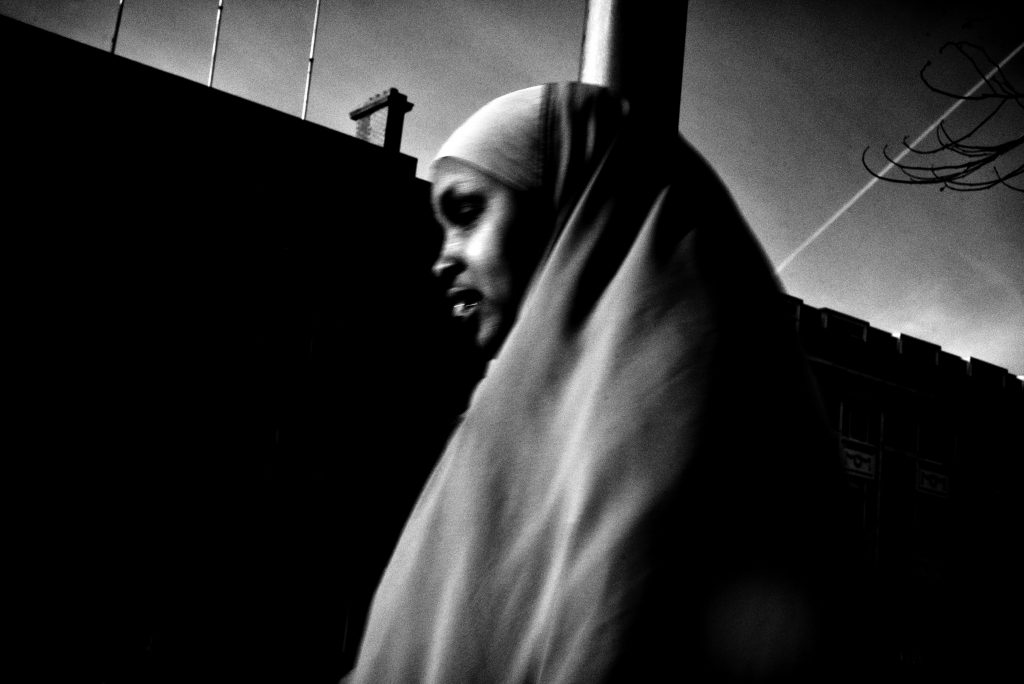 Barely a few syllables, i / ON / End. articulated in the secrecy of these deep shadows… These are the respective titles, lapidary, of the three photographic bodies of work made to date by the photographer and presented here. It took Eamonn Doyle one, two, three letters to retain the urban and cosmopolitan flow at work in his images, no more. This is because he is sparing with words, perhaps because they are inevitably fallible; surely because the medium chosen here is photography. In his three eponymous photographic books, i / ON / End., no text, by him or anyone else, guides the reading. Only the images, full frame: incessant movements, decided steps, assumed directions. Bodies on the march stand before us. Where are they? Dublin, some clues here and there are scattered with restraint. Where are they going, all so busy? Silence.

The photography of the man who devoted the first twenty years of his creative life to sound (being the founder of a label and a festival) is fundamentally musical, playing a concrete score made of background noises, heavy footsteps, and soles scraping the pavement, cans rolling on the sidewalk, cheap music, the whistling hum of cars and the shrill cries of ambulance sirens, in the middle of which, always, these long silences, deep breaths without which music would not be.

On his score, for only notes, follow bodies, trunks sometimes without face (either that it was cut in the framing, or that we see only shoulders and nape). For Eamonn Doyle, like his compatriot the writer Samuel Beckett, whose work he often cites as having been decisive in the development of his photography, the primary and unsurpassed vector of expression of being, the one that supplants all other means of saying it, including the verb, is the body and its presence. The stage on which they take place in Doyle’s work is the street.
Not the space of transit, linear, that one would borrow to go from a point to another, but an almost confined, labyrinthine space.

So you will notice that the images are not organized here wisely on the wall in a single straight line. In Doyle’s work, the space of the exhibition rustles with the mixed and clashing footsteps of all these beings. In this absence of panoramas or any kind of wide shot, the city reveals nothing of its geography or its scale. The photographer has not extended himself: he has chosen a single street as his scene, one that he walks along every day (being that of his home), a restricted perimeter, which he revisits constantly, from day to day, from series to series.

Eamonn Doyle frames tightly, and by doing so, makes his own presence sensitive to the image: he, a body sharing the same flow with his subjects, following in their footsteps to capture it as closely as possible. This way of «eating» the bodies, showing them most of the time in a fragmentary way, reminds us of the images of William Klein, Leon Levinstein, Mark Cohen and more to the East, of Daido Moriyama. The use of the shot from an outré point of view, in plunge (further diminishing the prostrate body in the i. series) or counter-plunge (erecting them a contrario to the rank of monumental figures) further supports these formal resonances. And if his subjects are not British but Irish, one can recognize, especially in his first opus i, the echo of Martin Parr, although the string he makes vibrate here has a more tender than cruel sound. Noting this visual connection with the great figures of the genre known as «street photography», Eamonn Doyle has been inducted as the new herald of the genre. But the label does not inform the authentic nature of the work, unless one assumes that there is such a thing as street photography, or studio photography (and why not then apartment photography). Both are little more than blank pages on which to write drama, comedy or tragedy.

But even more than these photographic affinities, the one that stands out without any detour is a literary affinity, maintained and claimed, with Beckett. The series i, realized in 2014, is a gallery of portraits of Beckettian figures, taken on the two famous and very wide arteries of the North of the city, Parnell and O’Connell Street, that is to say a radius of hardly one kilometer. Elderly people, supposedly from modest backgrounds if we judge by their clothes and accessories, struggle along, their backs bent, their silhouettes as if absorbed by the asphalt, caught in the tangle of urban signage. And there to think of Beckett again and his sound piece « All those who fall « : « a beautiful horrible idea full of wheels that squeak and feet that drag, of breathlessness and panting «…

Faced with these isolated, resigned figures, about whom he knows nothing, Eamonn Doyle asks himself: «how to approach the photography of these people who were (and who remained) almost unknowns?» and continues: «The philosopher Wittgenstein said, «Where one cannot speak, one must remain silent. Rather than taking these words as a warning, and restraining myself (meaning that not knowing the person, I should not photograph them), I read them as an exhortation: to photograph against all odds, despite the absence of knowledge or experience, as in Beckett’s double bind: «I cannot go forward, I will go forward.

How then to make an image of this strangeness? How to give an account of this irreducible distance to the Other? Then Doyle to advance by taking the party of its announced failure: «I realized that I will not gain any knowledge of their being by the photographic seizure, but that it would perhaps leave something of the attempt, perhaps even of the failure». One understands better then the regular avoidance of the face, since it could not inform on the being. The body, the posture, even the folds of the clothing would then be more talkative than the narrative drawn by the features of the face. Explicit reference to Beckett’s play (Not I), i suggests in this use of the lower case written in italics, this lonely figure, «anti-heroic, even stoic».
With ON, the photographer presents this time a cosmopolitan crowd, young, in wider frames, integrating the architectural and typographic environment. This time, it is through black and white with strong contrasts and the use of low angle that Doyle sculpts, under the harsh light of Dublin, the incessant flow of passers-by. End., his last opus, combines black and white and color views, plunging and low-angle shots. And to complete this multiplication of approaches, the photograph is in some places covered by a yellow tide, in others, covered with maze-like black interlacing, silk-screen printed. As if by capillary action, human and architectural matter impregnate each other: treated on the same scale, man lends architecture movement and breath, while the constructed matter imprints monumentality and geometry on the bodies. The architecture appears incarnate and the body, reified; the two, inseparably linked, as underlined by the head-labyrinth that seals this End.

Like the first two bodies i and ON, End. was conceived for the book, before being conceived for the wall. With this lapidary and definitive title, End. is the one that wants to gather, not without awareness of the vanity of the enterprise, Doyle’s expression on this moving and multiple matter of the Dublin street. And for this last part of the trilogy, as if to put the final touch to it, he adds the interpretations of Niall Sweeney, graphic designer, and David Donohoe, musician. One prints these graphic forms on or next to the photographs, the second creates the soundtrack. Concrete, thick, black forms and sounds extend the echo of Doyle’s images.

To find a form which accommodates disorder, such is the task of the artist today, said Samuel Beckett. And Doyle goes forward too and does what the photographer must do: respond to his imperious desire and make an image, in spite of everything.